Grungy, post-industrial, artsy, and cheap, Montreal has a bit of a “Berlin of the North” feel to it. But what many people don’t know is that it is one of the most politically vibrant cities in North America. A city tour of social history… 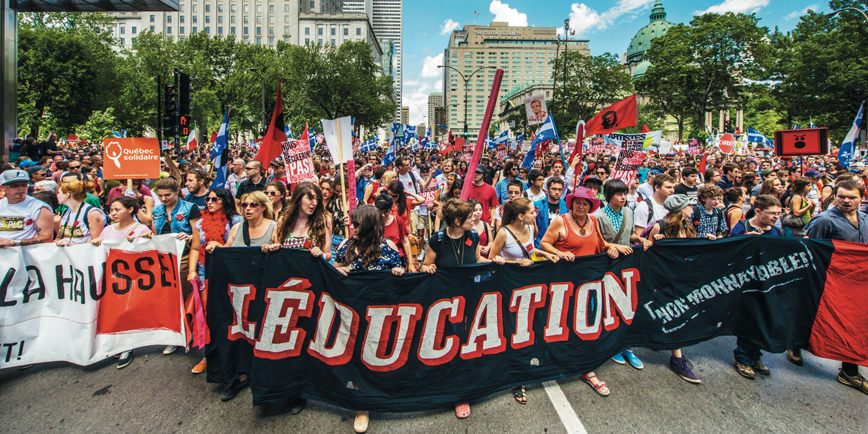 It all started in the 1960s. In Montreal, as in all over the world, this was a time of social upheaval and great changes. Many wanted Quebec independence and a more secular society –this period of protests and reaction against the Catholic church is now called the Quiet Revolution.

Less well known is the fact that during this period, Montreal residents started organizing their own caring economy. The first autonomous and community-run clinic was set up in a working-class neighborhood, Pointe Saint-Charles, in 1968. Childcare collectives, cooperative housing and businesses, and community centers followed. By the end of the 60s, Montreal’s citizens had built an ecosystem of mutual aid organizations –socialism by and for the working class.

This period also came with intense social movement mobilization, from militant labor unions, women, and students. In 1969, the FRAP (Political Action Front), a coalition of grassroots municipal activists, formed a party and ran for city elections. Growing political tension came to a head during the 1970 October crisis, when pro-Quebec independence radicals kidnapped a Quebec politician and a British diplomat. It resulted in a full-scale military occupation of the city –tanks on the street and raids of the homes of prominent activists. Many of the FRAP’s main leaders were arrested. This was in the middle of the municipal election campaign, and they lost the election.

In the 2018 local elections, Quebec Solidaire became the third party, at 16 percent of the vote. Comparisons can be made here with Podemos in Spain, Syriza in Greece, and the HDP in Turkey.

The 1970s and 1980s saw expansion of the welfare state, involving slow integration of Montreal’s independent citizens’ initiatives. Community-run clinics became part of the public health system. By the 1990s, the Quebec government developed a policy of what they call the “economie sociale”, the social economy.

This had a two-sided effect. On the one hand, it strengthened and supported a lot of existing initiatives, creating a social safety net for those excluded by the dominant capitalist system. On the other, what were initially citizen-run, autonomous movements and spaces became part of the state bureaucracy, and thus depoliticized and, eventually, defunded under austerity measures.

Quebec saw an economic recession in the late 1980s and early 1990s from which it never recovered. What followed was three decades of managed austerity; what theorists Jamie Peck and Adam Tickel call “roll-back” and then “roll-over” neoliberalism. Existing welfare programs were significantly cut back; food banks became a prominent feature of society. The social economy model became a way for the state to offload the costs of vital social safety networks onto its citizens, closely integrated with a grant-based, charity-oriented network of community provision.

“Roll-over” neoliberalism came in the form of a “re-branding” effort by the city starting in the 2000s, following what can be called the “Barcelona model”. Festivals totally removed from the city’s music and cultural communities were given massive funding, a whole area of downtown was demolished to make way for the “Quartier des Spectacles” –a new complex of museums, art centers, clubs, and bars. Post-industrial sites, particularly in working-class neighborhoods, were revamped into condos and high-tech and IT districts.

“The Maple Spring” and “the casseroles”

However, resistance to neoliberalism came to a head in the massive 2012 students’ strike, “the Maple Spring”. Protesting tuition increases imposed by the liberal government, an estimated 250,000 students went on strike in the whole province. Students were organized in a leaderless confederate model, with institution-based syndicates organizing closely in collaboration at a provincial level. The sheer size of the protests, and the mass participation by citizens, provoked the government to react, first making protest illegal, then calling an election, which they lost.

Though tuition fees did eventually go up under the newly elected government, there were several direct effects, which today put Montreal at an interesting crossroads –between more neoliberalism, protecting the welfare state from further erosion, and an alternative model of radical municipalism, which is today in its infancy.

First, following the violent police attacks on student protesters, citizens joined the daily protest marches. Protests started in each neighborhood and funneled out to larger arteries, eventually ending downtown. This movement was called “the casseroles” because it involved banging pots and pans at marches. The rhythmic beat of the casseroles was immortalized in a field recording sampled by the famous Montreal experimental band, Godspeed You! Black Emperor, on their 2012 album, ‘Allelujah! Don’t Bend! Ascend! One result of the casseroles was that residents started self-organizing in neighborhood-based assemblies, which eventually confederated for a brief period only to fall apart shortly after when the movement momentum slowed down.

The climax of the student strike was when the Liberals organized a conference to promote the “Plan Nord” at the Palais de Congress in downtown Montreal, a policy platform of extractivism, mining, and privatization of the province’s resources, much of it on Indigenous territory. Students showed up en masse to shut it down. It was war in the streets, and the event ended up cancelled, and the Plan Nord a failure. This was the moment, when the movement seemed to be most strongly engaged with other movements, making many students aware of the intersections between global capitalism, neoliberalism, climate justice, and Indigenous struggles.

Another effect of the student strike was the further growth of the radical electoral party, Quebec Solidaire. This democratic socialist party is conceived of as being directly democratic, with full participation of its members. In the 2018 local elections, Quebec Solidaire became the third party, at 16 percent of the vote. Comparisons can be made here with Podemos in Spain, Syriza in Greece, and the HDP in Turkey, and the equivalent role of the student strike and the Occupy movements in making space for this new form of politics.

Today, we are seeing a renewal of municipal-oriented progressive politics. Projet Montreal, a sort of urban planner-community activist party, won municipal elections in 2017, and Valerie Plante became the city’s first female mayor. However, the party quickly showed its neoliberal agenda with their focus on attracting more high-tech business and investment capital, and an unwillingness to address the growing housing, racism, and poverty crises. This has left an opening for radical municipalism on the left.

On the one hand, the party does have a “consultancy” process in place where they hold town halls, where leaders have to take public questions of party members. This has become a space for people to challenge the supposedly progressive leadership to make good on their promises to raise the minimum wage, build more social housing, and ensure a more inclusive city. On the other hand, many community organizers see little change from the usual party politics, and, frustrated by the lack of action by politicians, they are seeing the need to organize independently of them.

Take for example, my own neighborhood, Parc-Extension. It is arguably the poorest and most diverse neighborhood in Canada. However, the arrival of an Artificial Intelligence district, a Microsoft headquarters, and a new university campus on its borders mean that rapid change is coming soon. Last election, we elected a long-time community activist, who worked on housing and migrant justice issues. The celebration was not long-lasting, as as soon as she got into office she was forced to agree to the building of a new high-end condominium where there are now several important ethnic and community groups. So we are organizing other ways to hold her, and her colleagues, accountable to the people. The Montreal left, which in a short period saw a possibility once a more progressive party was voted in, quickly saw that there is still need to build power outside of electoral politics.

There is also a resurgence of community-based radical municipalism. In 2018, neighborhood activists (many of whom had been involved in the student strike) opened Batiment 7, a huge self-run autonomous cooperative center in the working-class area of Pointe Saint-Charles, the same neighborhood where the first community clinic was born in 1968. It still exists today, and “the Point”, as people call it, now has a vibrant ecosystem of community groups, who are now mobilizing against gentrification.

Throughout Montreal, there is a renewed interest in cooperative housing, and a growing movement for social housing and tenant rights, largely as a reaction to gentrification. Indeed, the housing movement is today emerging as the key struggle going forward. Around the city, citizens are also seeking to start cooperative economy initiatives and autonomous, political community centers.

The future looks uncertain, however, it is there for the taking. What remains to be seen is how the growing municipalist movement engages with, and perhaps merges with, existing movements for climate justice, anti-fascist, migrant and racial justice, and Indigenous self-determination. Montreal, with its history of militant labour, feminist, and student organizing, remains one of the most politicized cities in all of North America. It is possible that it becomes the next radical municipalist hotspot, like Barcelona today –if it doesn’t turn into hyper-branded and neoliberal Barcelona first.