We witness the devastating effects of market Islam on economy, society and environment. However, it is possible for practicing Muslims to get organized for an anti-capitalist economy. Coop Halal, whose partners are mostly Muslims living in Catalonia, is a living example of this. The co-founder of the cooperative, and an expert on Islamic economy, Najia Lofti tells their story. 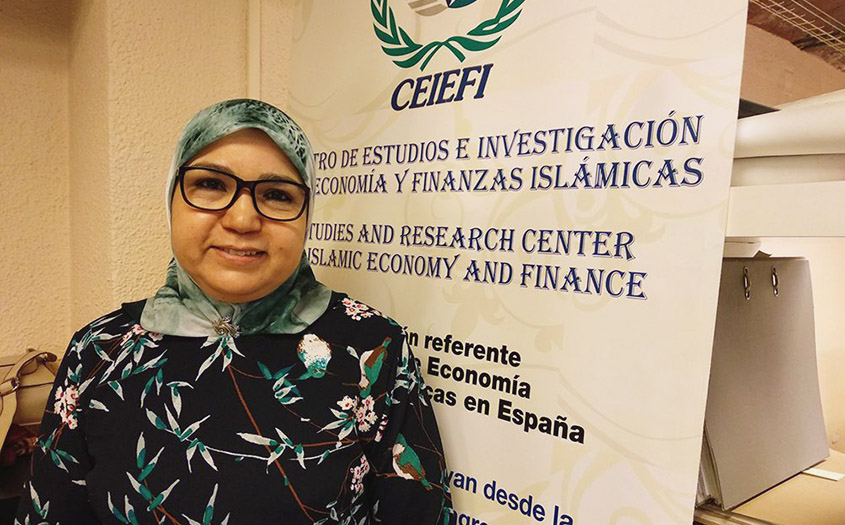 How did you start, what were your motivations and goals?

Najia Lofti: After the 2008 economic crisis in Spain, most people, including myself, lost their jobs. Then, I decided to get on with this project, which I was thinking about for a long time. So, we started a cooperative offering Islamic financial services and products, as an example of the solidarity economy networks that I was in fact working on academically. Before that, in 2013, we first founded an organization named Education and Research Center on Islamic Economy and Finance. We started to spread the idea that a social and solidary economy is possible.

What does Islamic finance mean?

There are various principles concerning Islamic finance, but we can count five main principles. First of all, interest loans are forbidden. Secondly, in interest-free loan agreements, there can’t be clauses that would allow one party to exploit the other. Thirdly, you can’t provide finances for projects that would harm human health or cause ecological damage, such as cigarette, alcohol, prostitution, pork meat production and arms trade. Fourthly, profits and loss are to be shared equally by involved parties. In this way, risks and responsibilities are to be shared by the institutions providing credits that will lose their capital and the ones taking credits, who will lose their jobs and labor, in case things don’t work. Afterall, financial tasks always need to have material foundations. You can’t sell money for money. There needs to be a product or property to secure the money in circulation. We call the financial institutions who follow these rules Islamic.

Are there other Islamic financial institutions around the world?

We set up the CoopHalal Islamic Financial Services Cooperative with seven members, including Moroccan, Pakistani and Spanish friends. Usually, there is a social committee in ethical finance organizations, which examine the projects from an ethical perspective. We have a sharia committee doing the same work.

How did you start the cooperative?

We started as four friends: a Spanish professor of economics, two other friends and myself. We visited various workshops on solidarity-based economies. I believe, Islamic financial products and an economy based on Islamic principles can provide solutions for economic crises that threaten our lives, as practicing Muslims. After two years, people started to ask: “you are telling beautiful stories but how do they matter without an institution where we can put our savings?” Our organizational team got bigger in the meantime. Roca Junyent Law Office joined our project. We communicated with Central Bank in Spain. But we needed a large capital to set up a bank. Also, due to the official obstacles before setting up an Islamic bank, we decided to build a cooperative instead.

Did you get in touch with other ethical finance cooperatives in Catalonia, such as Coop57?

Coop57 helped us in forming the cooperative and our constitution. We set up the CoopHalal Islamic Financial Services Cooperative with seven members, including Moroccan, Pakistani and Spanish friends. Usually, there is a social committee in ethical finance organizations, which examine the projects from an ethical perspective. We have a sharia committee doing the same work. This committee in Morocco examine if projects are in line with Islamic law. Another committee checks if our contracts are appropriate according to the legislations in Spain. 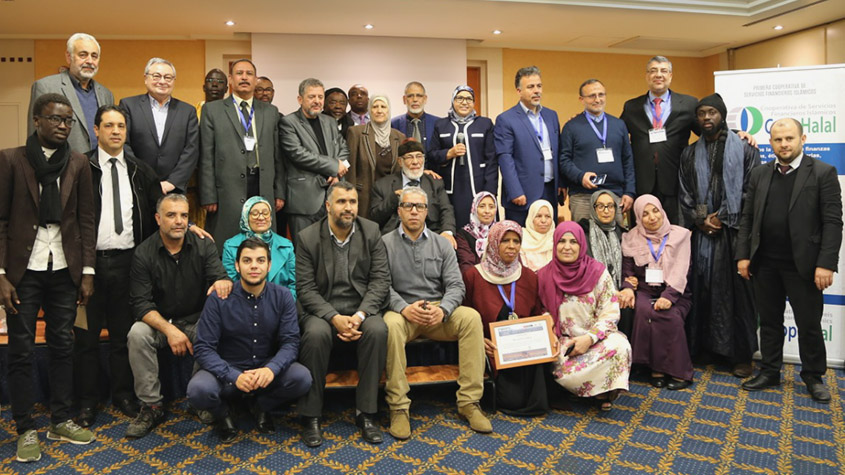 Who are involved in the sharia committee in Morocco? Do they have rules concerning male-female relations, within the institutions that apply for credits?

There are various sharia rules in Morocco. There is an International Sharia Committee that issues fatwas. There are local rules in each country and region, depending on the local laws, regulations and customs. Local rules can be public or private. The committee we work with functions like a private company. It has a director and many employees. They are professionals in Islamic law, economy and finance. They examine the contracts and arrange insurance certificates. They give certificates to financial products based on sharia principles. Unfortunately, there are no women in the committee we work with. In fact, there are barely any women in these committees. We hope this will change in time. We come up with rules concerning women in the cooperative. This year, we prepared a project to support cooperatives consisting of either fully or mostly women, together with Labcoop (Cooperative Laboratory that prepares projects and provide education on building cooperatives and solidarity economies). Labcoop will receive the applications and provide education to women on cooperatives and trade. CoopHalal will be responsible of working on sustainability and technicalities with women, as well as providing the financial aid for the projects. Our cooperative intermingles Islamic economy principles and universal solidarity economy principles. As of now, we have about 90 partners.

What are the partnership conditions?

We have two types of partnership. People who bring us their savings or save through us, and people who use our financial services. Each year, we organize an Islamic finance conference in Barcelona. At the end of 2018, for the first time, we could update our partners’ savings by distributing “service fees”. This made more people decide to use Coop Halal instead of traditional banks. Some people cancelled their retirement plans in traditional banks and joined the cooperative. We have immigrant partners who manage to make small amounts of money every month through the cooperative. The distribution of the earnings is done in the same way as other ethical finance cooperatives. Our general assembly gathers once a year. Transparency is our main principle. All the partners decide collectively how savings will be updated. Our members are mostly Muslim people who want to use their savings according to religious principles. This doesn’t mean we exclude non-Muslims. We have non-Muslim partners too.

We have two types of partnership. People who bring us their savings or save through us, and people who use our financial services. Each year, we organize an Islamic finance conference in Barcelona. At the end of 2018, for the first time, we could update our partners’ savings by distributing “service fees”. This made more people decide to use Coop Halal instead of traditional banks.

People are scared of going to traditional banks. Their high requirements are difficult to meet even for non-migrant people. Majority of people cannot provide the guarantees that the banks require. We also require guarantees but we know that not everyone can provide them. Hence, we accept personal guarantees too. For instance, a person who needs eight thousand euros brings four persons who can each vouch for two thousand euros. Lately, we discuss how we can finance people who want to buy a house. We want to provide halal mortgage, as opposed to the mainstream banks.
We are now building a four-floored building that costs 600 thousand euros. We sell the flats by selling shares. People who want to become shareholders buy 10 shares, each worth 1000 euros. It is a kind of social housing project. Shareholders will gain based on their savings, if the project brings profit. 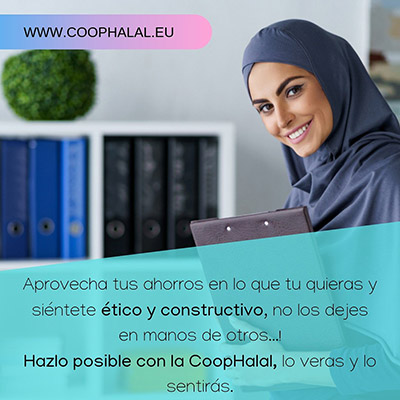 How does halal mortgage work? How is it different than mainstream banks?

For instance, we buy a house and then sell it to the customer for its market value. Yet, according to Islamic finance principles, the price of the house doesn’t change over time. So, the customers know what they will pay in advance. In addition, there are no contract articles that put the people who get credits in difficult positions, such as the possibility of being evicted under some circumstances. We would not make anybody homeless. When people have difficulties with their payments, we try to rearrange their installments. Also, in halal mortgage, there is the “co-ownership” system. This means, the owner of the house is both the customer who gets the credits and the institution who provides the credits. The customers, then, can sell their “share” if they want to. In sum, the contract puts human life at the center, not only one party’s interests.

How was it for you, as an academic, to put your academic research into practice?

It is an infinite learning process. We indeed put some financial models into practice that I was studying, through Coop Halal. My main concern was the harmony between trade agreements and Islamic agreements. One of the Islamic trade agreements is called muşaraka, which means participation. Participation is based on equal responsibility and equal benefits. In my thesis, I researched which agreements within the traditional trade system were similar to muşaraka.

How does the credit mechanism work?

The person who gets the credit invests the money in the work and gains profit. He or she needs to share half of this profit with Coop Halal. If they don’t earn profits, then Coop Halal doesn’t get any money. We think this is the fairest way of providing finance.

How do you cover the loss if a project fails?

This hasn’t happened so far, but we have measures to take. First of all, we make a detailed research before giving credits to a project. We make sure the necessary insurances are prepared. We require material guarantees and guarantors. We also have a guaranty fund, since we are a financing cooperative. We are obliged to transfer 20 percent of the net profit to this fund at the end of each year. We don’t “forget” a project we provide finances for; we follow it closely and try to come up with solutions when we observe problems.

Would it not be more difficult to provide interest free loans in Turkey, for instance, where the inflation is high?

Islamic finance aims at recreating real economy. It anticipates a decrease in inflation and in speculation, when there are less relations of debt. If more institutions adopt these principles, economy would increasingly become more production and solidarity-based. You surely can’t copy-paste a model in somewhere else. Credit contracts need to be adopted to the country’s conditions. There are more than 300 types of agreements to provide credits according to Islamic finance principles. For instance, Islamic finance organizations can provide interest free loans in the form of aid and scholarships. Another type of agreement is participation through investment, which means the partner of the Islamic finance organization contributes to the capital. Another way is purchase and sale, which can take the form of long-term rental.

How does Coop Halal help the integration of immigrants?

Coop Halal is an alternative to the mainstream banks, which use people’s savings without their consent and in contradiction with their beliefs. We carve out a space for Muslim immigrants. People who bring their savings to Coop Halal feel more equal in social life. For people to bring their savings to Coop Halal, they don’t need to have residence or work permits in Spain, they just need to have the passport. Coop Halal is an opportunity for us, women too. We are currently looking into two women cooperative projects: a stitching atelier and a project by women who want to sell their food products. We advised them to form cooperatives.

How do the large social solidarity economy network in Catalonia react to Coop Halal?

We got in touch with ethical finance cooperatives and others as soon as we moved to the common working space with Ecos cooperative, consisting of 18 cooperatives. We join the workshops organized by Ecos. As we’ve communicated with other solidarity economy networks, we’ve clearly seen the commonality of our goals and principles. We feel comfortable in this network. Other ethical finance organizations still charge interests, maybe low, but still. But when we provide finance, the risk is fully shared by the finance organization and the investor.