Fifteen in 2013, twenty-five in 2014, fifty-nine in 2015, ninety in 2016, eighty-nine in 2017, seventy-three in 2018… Between 2013 and 2018, three hundred and fifty-one people took their own lives because of high cost of living, debts and unemployment. Peoples’ Democracy Party’s MP Tulay Hatimoğulları Oruç brought this dramatic issue to the National Assembly’s attention by a parliamentary question.

The Grand National Assembly of Turkey (TBMM) has directly witnessed at least four suicide attempts in the last two years. We’ve seen people who burned themselves, who climbed to the roof of the Assembly to jump down, who put guns to their heads in the Assembly’s courtyard. Have you ever personally witness such scenes? 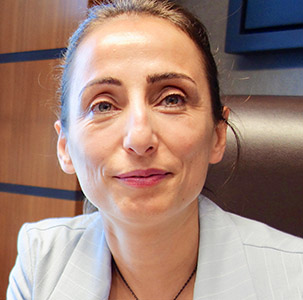 Tulay Hatimoğulları Oruç: One day, last November, I was in our party’s vice-president’s office. Suddenly we spotted someone on the roof of public relations office building. We’ve joined this Assembly by promising “jobs for everyone, food for everyone”. Seeing this situation is devastating for us. You ask yourself, how can a person do this? You imagine the degree of desperation, distress to come to reject one’s existence. People are challenged not only with hard work but also with hunger. Their dignity and pride are tested to the extreme. They’re struggling with life, with their jobs, with the high cost of living…

Korkut Boratav [a prominent Turkish economist] says: “It’s obvious that this crisis affects working classes in many different forms like unemployment, massive layoffs, wage cuts, unpaid salaries, impoverishment, increased debts… But a much more lasting impact of all these is the risk that it could lead to social collapse.” Do you think that the increasing number of suicides and suicide attempts are one of the results of this “social collapse”?

Korkut Boratav’s assessment is very important, economical situations can create lasting collapses and it is exactly what’s happening. That could be linked to those suicide attempts. Those who are responsible of unemployment, layoffs, wage cuts, unpaid salaries and increased debts are the ones who are responsible of these suicides. Like I said, people are trying very hard to survive and as the last resort of their resistance they put their own life at stake. The whole responsibility of this situation falls on the government’s shoulders.

Is one of the reasons that suicide may seem as the only solution the fact that there aren’t sufficient resistance or solidarity networks?

But who’s blocking all the human rights movements? Who’s behind oppressing workers’ demands? According to Turkish Statistical Institute’s (TÜİK) data, the cost of living has become the second foremost reason of suicide attempts in Turkey. First of all, we have to clearly identify the main issue: neoliberal policies are what drives people to suicide. People are committing suicide because they can’t make ends meet. Everyone has to face this dramatic reality. All the numbers indicate an increase in suicides. Since the 1980’s there has been some periods in which labour movements were more dynamic, yet it’s clear that it wasn’t enough to have a massive impact on the system. This assessment should be regarded as a self-criticism for all who are working and thinking on these issues.

According to Turkish Statistical Institute’s data, the cost of living has become the second foremost reason of suicide attempts. According to Assembly of Workers Health and Work Safety data, the three foremost reasons behind work related suicides are debts, mobbing and unemployment.

Still, we see various forms of resistance and a real dynamic in labour movements. But the main problem is that, generally speaking, these different groups ignore each other. That’s why labour organizations and political parties that share workers’ demands have an important mission: to initiate interactions between all these smaller and fractioned organizations, nationwide and with an international perspective.
If you look at it on a larger scale, the fight against the circumstances causing suicides is the fight against neoliberalism. We have to strengthen worldwide workers’ solidarity and resistance networks. That should be our main responsibility. For that local, grassroot organizations should be reinforced. Socialist-leftist parties and labour organizations should improve their organizational capacities.

Work related suicides aren’t only a problem of Turkey, it’s a worldwide issue isn’t it?

The World Health Organization (WHO) lists unemployment, economic difficulties, immigration, radical economic and political changes that affect people’s working and living conditions as causes of suicide and risk factors. Working hours are getting longer and longer and working conditions with no security whatsoever, fear of getting fired at any moment make it very hard to keep holding on. According to ISIG’s (Assembly of Workers Health and Work Safety) data, the three foremost reasons behind work related suicides are debts, mobbing and unemployment.
Suicide Prevention Australia Association affirms that workers’ suicides could be avoided if the link between work and suicide is outspokenly accepted. There are many factors behind depression and stress that are the main causes of suicide like difficulty to find work, performance pressure in the workplace, fear of losing your job, sexism, poverty, low wages, social exclusion.

I’ve recently read that in South Korea more than forty people commit suicide every day. In Seoul someone attempts suicide by jumping off one of the city’s bridges in every forty minutes! Mostly these suicide attempts are related to problems at work or the cost of living. They’ve even come up with a special task force for this problem. This issue exists all around the world where governments and big corporations put all the weight of the financial crisis upon working class people’s shoulders in order to maintain their power. The turmoil that this crisis provoked threatens the very lives of workers. All of this signify once more how crucial it is to establish powerful working-class organizations.

In your parliamentary question you asked: “Do you have plans to change the definition of ‘unemployment’ to ‘real unemployment’ by including ‘desperate unemployed people’; ‘those who are ready to work but not looking for a job’ –category of which 71 percent are women, ‘visible underemployment’, ‘seasonal workers’?” Don’t the official figures of unemployment already include these categories?

Official unemployment figures never reflect the reality. This is the case for two reasons. Firstly, because different definitions of unemployment aren’t classified in one single category and secondly, a considerable number of people who are on training courses are shown as employed. The ruling party, AKP, implemented a social project called “women’s employment” in which women followed courses for some household occupations such as sewing and needlework and they were paid. In some workshops they even received contribution to their retirement funds. These women are presented as employees. It’s just one of their ways to hide the real unemployment numbers. TÜİK [Turkish Statistical Institute –official statistics agency] also uses an extremely narrow definition of unemployment in order to reduce the real unemployment figures. We can only find out the effective numbers by adopting a much wider definition of unemployment.

The fight against the circumstances causing suicides is the fight against neoliberalism. We have to strengthen worldwide workers’ solidarity and resistance networks. That should be our main responsibility.

On May 24, president Erdoğan, while going out of a mosque after Friday prayer was approached by a woman who screamed out “I have two university degrees and can’t find work!” He answered, “Doesn’t your husband have a job?” And added: “Who said everybody would have a job.” What do you think of these remarks?

It’s disgraceful and very humiliating. The state has the responsibility to provide employment to its citizens. This statement means the rejection of this responsibility by saying “every man for himself”. It means putting the weight of cost of living to friends, family and solidarity networks. Asking a woman if her husband has got a job is the reflection of a mentality that excludes women from working life, from production. It sends her to her father, her husband or to some social help that was decided politically by some other men. This statement is so significant of the treatment of unemployment people or those who have unemployed wives, husbands, children… It’s a reflection of the desire to inject a culture of total obedience. What the AKP government wants by saying this is ato keep using the social aid networks established by its own electoral base. In our parliamentary question we asked about this too: “Do you have any projects to reduce unemployment rate especially for young people and women?” We’ll see how the minister will respond. Maybe he’ll echo the president: “Who said everyone would get a job!”

Your motion asks also this question: “According to the Social Security Institution [Sosyal Güvenlik Kurumu –SGK] between September and October of 2018, the number of people who are covered by social security decreased by 144 thousand. Why doesn’t the SGK disclose the exact number of people who effectively have social security for the past five months? When will the SGK make public the figures for 2019?” How do you explain the fact that the figures aren’t made public?

Look at the dates. After they unlawfully cancelled the results of the March 31 local elections in Istanbul and as we were heading to re-run, they would never disclose a document that proves their failure. They won’t, because the number of people effectively covered by social security is a very clear indication of unemployment. If you’re not disclosing it, it means you’re simply hiding it. That’s why we asked the question.
AKP looks at all this from its own survival perspective. Unemployment, cost of living, economic difficulties will have a real impact on AKP’s prospective strategies. They see that their base is unhappy too.

Labour organizations and political opposition as a whole might expand the resistance and solidarity base. That’s what my heart tells me. But my mind tells me that we’re in the brink of a social collapse.

When we look at the last two terms of the parliament we see that Peoples’ Democracy Party (HDP) and Republican People’s Party (CHP) have repeatedly posed motions about work related suicides and they have all been refused or ignored. When do you expect a response to the motion you put through on May the 22th?

Maybe never. The Ministry of Family, Labour and Social Security have almost never answered any of our motions up ton now. Overall, we’ve received answers for less than five percent of our motions. Two weeks ago, CHP put a motion for the creation of a parliamentary investigation commission. Even if they ignore our motions, they could create their own committee to investigate this vital situation. But they don’t. Despite all our efforts they won’t hear, they won’t see.

Economic recession also has obviously a big impact on unemployment. The latest figures indicate a recession in all sectors but agriculture –which is only due to the harvesting season. What are your predictions for 2019?

As long as this administration keeps doing a bad job on the economy these problems will get deeper and deeper. Above everything else we need social peace. We need that our country’s resources to be allocated to its people, to employment, to health instead of security policies. All the money spent to buy S-400 missiles from Russia could have been used to fight against poverty. Take agriculture, we’ve become completely dependent on export. Honestly, just like for the other issues, I don’t see any reason to be optimistic about economy. Unemployment rate will continue to climb, people will keep sacrificing their bodies, their lives because of poverty and hunger. Facing these contradictions, labour organizations and political opposition as a whole might expand the resistance and solidarity base. That’s what my heart tells me. But my mind tells me that we’re in the brink of a social collapse like Korkut Boratav has said. But we will keep fighting no matter what and we’ll never lose hope.