In the fifth part of our series “Alternative Organizations in the Labour Struggle”, it is now the turn of Ekmek ve Onur Derneği, the Association of Bread and Pride. The association aims to establish line of work committees, and workers’ assemblies. The spokesperson Emrah Arıkuşu, and a member, Gülbin Demirel tell their story.

When was Bread and Pride founded, and with what goal?

Emrah Arıkuşu: In the year 2015 we took the decision to publish the Bread and Pride newspaper. Bread and Pride, in essence, realized itself during the ongoing actions of metal workers during the Collective Labour Agreement period. So it has a symbolic meaning. In the period that followed, we were at workers’ resistance actions, factories, workplaces and workshops. Before that, we have a neighbourhood organization experience of a few years, under the name “Emekçi Gençlik [lit. Working Youth]” We broadened all our experiences and brought them together under the roof of Bread and Pride in a manner that we could spread across all lines of work. We aimed it to become a platform where workers from all lines of work could come into contact with each other. It has been four years. The association is a vehicle for our work to take a leap forward. We don’t lock up our existing work and practices within the association. With the Bread and Pride newspaper and association we aim to build networks of solidarity with the impoverished in neighbourhoods.

Why did you choose to become not an independent union but an association?

Arıkuşu: We are not against the founding of unions. However, unions have lost their reputation, both in Turkey and across the world. Unions were cleaned out of their essence the more they failed to resist attacks from capital. This happened due to the lack of a class movement. Capitalism has the capacity to melt everything into air if it fits its own benefits. Founding another union does not have any significant impact on the already existing structure of unions. There is a cast structure there. It must be destroyed. And that can only happen if the class movement grows. Nevertheless, it is not wrong to opt for alternative unions. Alternative unions do make some contribution to the movement.

We are not against the founding of unions. However, unions have lost their reputation, both in Turkey and across the world. Unions were cleaned out of their essence the more they failed to resist attacks from capital. Founding another union does not have any significant impact on the already existing structure of unions. Nevertheless, it is not wrong to opt for alternative unions. Alternative unions do make some contribution to the movement.

We see the struggle as a whole. We believe that we must use whatever tool the interests of the working class requires, whatever tool will help expand its struggle. An independent union can also be opened; it has to take shape around concrete needs. Today, the easiest institution to establish in the legal sense is an association. Workers also need an institution where they can apply to solve their problems. They also need a space where they can gather, and where, as members, they can feel they belong to. There are unionized workers among us, too. That shows that the union does not fully correspond to their needs. And after all, we have designed the association in a format that workers can apply regarding their problems, where we can provide legal support and organization support and as a place where we can touch their everyday life with social and cultural activities.

The workshops you organize are the keystone of your general actions. Can you tell us more about one of these workshops, the theatre, and how you came around to the idea of forming a theatre troupe?

Gülbin Demirel: When you mention class struggle people first think of factories, but we are in an area where the service industry dominates. The service industry has reached 70% in Turkey. I myself have been a supermarket worker for four-and-a-half-years now. I have to put up a struggle, and I do, but the real problem is coming together, and getting others to come together. We have no time or place to socialize. We have too many shifts, our work conditions are severe, we are absolutely unable to spend time together. When we talk about grassroots organization, people think of acting together, but we are unable to get together in the first place. When we realized we couldn’t find a way out of these problems, we said, “let’s do theatre”. It set an example for solidarity, togetherness and friendship. We have had our theatre for around four months now. And we haven’t only worked on theatre, but we have found and established friendship and solidarity. This has also created some mobilization at our workplace. As we work at the theatre, we form a certain approach, other friends get involved, and from among them, workers that can lead begin to appear.

How do you define grassroots organization, the importance of which you emphasize for the awareness raising, struggle and organization of workers, what steps have you taken in this direction?

Arıkuşu: A grassroots organization is a type of structure that aims to solve the main problems of workers at workplaces. These problems may include meals, travel, unionization, overtime, low pay, salary extortion, pressure or mobbing. Of course, this has been done for many years, but we want to especially emphasize “grassroots organization”. A defence line must be erected among the workers against the bosses, and that line is the grassroots organization of workers, in other words, getting together. This is the real issue, but how will we call it, will we be friends, or will we raise awareness and seek our rights? If we can transform smaller organizations towards struggle, towards a demand for rights, then it becomes the key for a greater organization.

Arıkuşu: If grassroots organization does not turn into a workplace committee then it stays merely as a group meeting to discuss problems. That coming together has to be given a form with an aim, with a goal.

In which lines of work do you carry out organization activities the most?

Arıkuşu: We organize in the supermarket, metal, construction, textiles, shoemaking and health lines of work. This needs to be seen and understood well: It is the capitalist class we are facing and the capitalist class has accumulated a lot of experience in the past 200-250 years. Especially, when we look at neoliberal policies carried out in the 1970s, in order to overcome its own crisis, capitalism did not only say, “let me consume public resources”. It carried out a multidimensional attack. When we look at what workers have experienced in the last twenty-thirty years, there is a whole set of issues, precarious work, uninsured employment, flexible and part-time work, permanent vs. contracted work. A fragmented situation has been created. 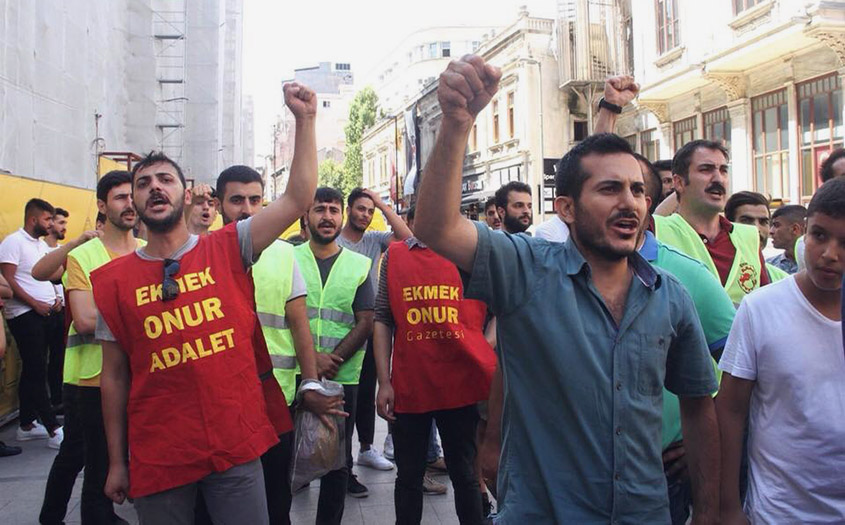 A second point is that, production fields have been narrowed down via small workshops, outside factories. There are fewer factories where thousands of workers are employed, in Turkey and in the world. In this sense, the service industry stands out on a global scale. We are not saying that there are no more lines of work, they are obsolete; but in this changing structure, fragmentation, a muddled vision, lack of contact, failure to act collectively, failure to form a union, all these problems have come to the fore. Is it possible to overcome this? It is very difficult, but the response must come precisely from where capital is trying to divide us, a multi-dimensional, multi-fragmented response is necessary. How can we unite, how can we stand side by side, how can we create togetherness? We have to ask these questions.

What does the changing nature of the lines of work tell us about the working class?

Arıkuşu: We have to act in accordance with the passing of time. It won’t work if you don’t build the mill on the flow of the river. The capitalist class has divided and fragmented the working class movement. This is one of the greatest obstacles in the path of our organization. All organizations, associations, unions, every single one must stand side by side. We must adapt to this differentiating situation. If we can form committees via grassroots organizations at separate lines of work, and then gather them at a general workers’ assembly, then we can lift up the working class movement.

Founding committees for different lines of work tcan intervene collectively when there are problems and find solutions that will pave the path for organization. Broader assemblies must be formed for coordination. In the textiles, supermarket and construction lines of work we have formed committees of workers who are Bread and Pride members. Our committees are vehicles that emancipate and realize us.

Can you tell us more about line of work committees and workers’ assemblies?

Arıkuşu: What we mean by that is founding committees for different lines of work that can intervene collectively when there are problems and find solutions that will pave the path for organization. The forms of grassroots organizations are to be determined by the committees at different lines of work. Broader assemblies must be formed for coordination. For instance, in Istanbul, in the textiles, supermarket and construction lines of work we have formed committees of workers who are Bread and Pride members. Besides, we have founded the Istanbul Bread and Pride Assembly. Our committees are vehicles that emancipate and realize us.

Demirel: In the past, when someone mentioned class struggle, we felt something special in our hearts, we no longer fully feel that anymore. Bread and Pride is striving to bring back the values we have forgotten. We are at workplaces, precisely inside workplaces, inside the working class, at that place which workers have forgotten, or the place, which the workers must be supporting. Because the worker no longer stands by the worker, the worker stands by the employer. We are on the side of the worker, we are working so all workers can stand side by side, we are standing up for the solidarity of workers, and it is our aim to build that solidarity.

Arıkuşu: The potential for a workers’ movement is there if we look at it on a global scale, and it is the same for Turkey, too; but there is no clear movement that has realized itself yet. To create it, we must stand side by side. Otherwise, we can say it as much as we want, “We will create such and such organization”. The reason the working class movement lacks power today is the lack of class vanguards. If that movement can be created, then it will also build its own structure. Otherwise, it is easy to just say, “come on let’s found a union, let’s form an association…” There is no prescription for anything. The working class is resisting, but it is not becoming a large-scale movement. That is because of the desertification we are facing. The working class is alone, and lacks a way forward. There is resistance, but it is not sure of its own power. It is precisely for the creation of this movement that Bread and Pride is working.