OECD’s assessment of Turkey’s economy, TÜSİAD’s harsh criticism of Erdoğan’s policies, Erdoğan’s fierce response and his denial of class realities… What do these current developments signify? A close-up to the increasing tension in the power bloc.

In the last month’s piece, I addressed the setback of the Justice and Development Party (AKP) and National Movement Party (MHP) alliance in the 31 March 2019 local election, and post-election turbulence in the political wing of the power bloc. In this article, I will focus on the increasing tension between the big bourgeoise and the government in Turkey as part of the aftershocks in the power bloc. Given that increasing tensions in the power bloc are closely linked to the OECD’s latest Turkey assessments, I will discuss this topic through the latest predictions of the Organization of Economic Cooperation and Development (OECD) about Turkey’s economy.

The OECD’s assessment of Turkey’s economy

According to the OECD, “after the severe financial shock in August 2018, which triggered a recession in the second half of the year, strong fiscal and quasi-fiscal stimulus moderated the contraction in early 2019”. The OECD added that there could be a partial recovery in the second half of 2019 if there were no new shocks.

The following graph shows the OECD’s 2019 predictions for Turkey. A striking feature is the declining contribution of public spending to Gross Domestic Product (GDP). In 2016, when there was a quarterly economic contraction for the first time since 2009, an increase in public spending brought a temporary economic recovery. However, this type of spending program has not yet happened in 2019. 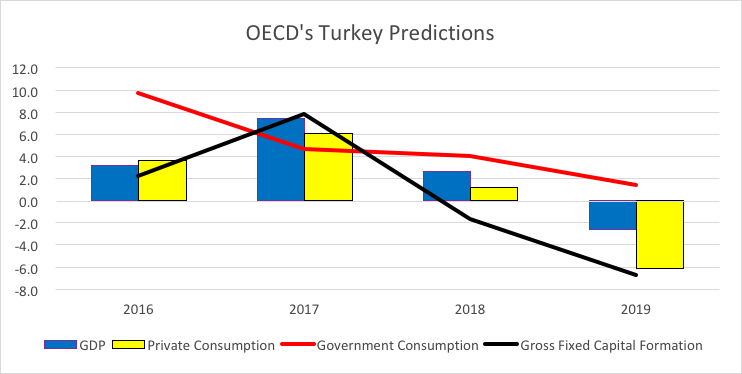 The course of private consumption shown by the yellow columns in the graph suggests there was an “escape to the future” strategy –credit led economic recovery program supported by state– in 2017 and contraction in 2019. Lastly, the decline in fixed capital investment since 2017 has already led to negative expectations for 2020.

In the assessment, the OECD remarked that the positive contribution of the devaluation of TL to exports and tourism was limited due to the international economic slowdown, especially in Europe. Economic recovery was also more difficult because of the uncertainty of economic policies and political conditions, and the private sector’s high foreign currency debt burden. Under these conditions, Turkey’s economy was anticipated to contract by 2.9 percent in 2019.

According to TÜSİAD, the current economic problems stem from government’s deviation from the IMF program. Consequently, the bourgeoisie expect the government to implement a stabilization program with or without the IMF. Unless this happens, the government will become less useful for TÜSİAD.

Finally, I will complete this part with the criticisms in the OECD’s assessment. It suggested that “the policy framework should be made more predictable” as a condition for economic recovery.

Uncertainties about the AKP government’s economic direction begun when the IMF program ended in 2008, and they further intensified after 2013, when the period of “crisis of crisis management” started. This problem, also mentioned by the OECD, was essentially the core of the debate between the Turkish Industrialists’ and Business People’s Association (TÜSİAD) and the leader of the AKP, and President of Turkey, Recep Tayyip Erdoğan, in the last week of May 2019.

“There has been a long-lasting deterioration in macroeconomic balances. It begun in 2007. It has deepened with the global crisis. Then, there was a short recovery, which was followed by a worsening. The deterioration, which started in the production sector, is now spreading to the financial area. It is again affecting public finances and manufacturing sector returns. Turkey cannot return to its bright days (2002-2007 period). The weakness, which could be tolerated for 10 years thanks to the strength of Turkey’s economy, is now challenging all sectors, from workers to employers, from farmers to artisans.”

Apparently, TÜSIAD’s main criticism concerns the direction of economic policy. It is also significant that Özilhan specifically refers to the 2002-2007 period, when Turkey was acknowledged as a candidate for European Union (EU) membership and its economic policies were conducted within the framework of the IMF program. According to TÜSİAD, the current economic problems stem from government’s deviation from the IMF program.

The second important point in Özilhan’s remarks is his emphasis that economic problems were intensifying by saying that economic issues are now “intolerable”. Consequently, the bourgeoisie expect the government to implement a stabilization program with or without the IMF. Unless this happens, the government will become less useful for TÜSİAD.

Erdoğan started by reproaching TÜSİAD’s criticisms: “You came to visit me a week ago. What did we talk about? Look what you are saying now.” Indeed, just fifteen days before, on the 1st of May, when trade unions and the various social movements were demonstrating against the government’s plan to eliminate worker’s job security by forming a severance payment fund, Erdoğan and his top bureaucrats were meeting with TÜSİAD members.

Two factors may explain TÜSİAD’s attitude. First, TÜSİAD were clearly forced to make a public statement because the government was delaying its austerity program despite the urgency of the bourgeoise’s demands due the deepening economic crisis. Second, the announcement that Istanbul’s recent municipality elections would be rerun meant postponing the austerity program. In response to these criticisms, Erdoğan targeted Özilhan directly:

“This person always tries to attack us with statistics. What was the national income per capita 17 years ago, what is it today? Economically, where were you 17 years ago and where are you today? How much has your company grown since then? How much have your friends strengthened? You never mention this. I know how you were doing 17 years ago, and I know how you’re doing now. If needed, I can expose that. I know how to bring those who are attacking Turkey from the inside to account.”

The harsh tone of Erdoğan’s response led many commentators to argue that we are approaching a breaking point regarding relations between the big bourgeoisie and the government. However, I would argue that it is more appropriate to see this tension as part of negotiations regarding the implementation of the new austerity program.

The question of delayed austerity

When I wrote about delayed austerity on the 1st of May 2019, at the 1+1 Forum, the decision to rerun Istanbul’s municipality election had not yet been announced. I indicated the importance of the delayed austerity question in the following statement:

“Various actors, including international finance capital and TÜSİAD, viewed the government’s announcement of the austerity program as a strategy to escape from the crisis. Its implementation may be delayed due to the possibility of rerunning the local elections in Istanbul because this type of severe austerity program undermines the neoliberal populist model implemented throughout AKP’s seventeen-year rule.”

The 6th of May announcement that the election would be rerun was seen as a reason to delay austerity. The postponement, however, unleashed fresh tensions within the power bloc. As outlined above, the essence of the debate between TÜSİAD and the government was big bourgeoisie’s impatience about its implementation.

The structural power of capital

Erdoğan’s criticism of TÜSİAD exemplifies the structural power of capital in capitalism. In the same speech, Erdoğan went on with his criticism in complaining that TÜSİAD members were not supporting the government’s “2,5 million jobs” program by hiring new employees. As he put it, “You need to take responsibility; you have giant factories, holdings. What happens if you hire five or ten unemployed people? What would you lose? You’re not considering these issues.”

These remarks clearly show us the structural boundaries of the political authorities in a capitalist society. As long as capital accumulation is largely based on private sector investments and these investments are based on firms’ profitability, the political authorities must implement economic policies to ensure the private sector’s profitability.

Similarly, as new employment is also provided largely by the private sector, the structural power of capital over the political powers becomes clearer, especially in times of crisis. Increasing unemployment erodes voter support for the political authorities while the reduction of unemployment depends on the private sector’s investment decisions. Thus, if the incumbent party cannot guarantee the profitability of capital, problems between the big bourgeoisie and the government will appear.

In short, since the March 31, 2019 elections, conflicts in the power bloc has continued with increasing tension between the big bourgeoisie and the AKP, the senior member of the bloc’s political wing. This tension essentially stems from a prioritization issue among the parties. While the government’s priority is to stay in power, big business prioritizes the implementation of a painful austerity program to escape from the crisis as soon as possible. The longer the government postpones its austerity program due to its political cost, the more the big bourgeoisie may seek other political actors to implement it instead.

While the working class or subaltern classes in general do not seem to have been considered directly within the political equation during all these developments, their role has become increasingly significant. Specifically, growing discontent among the subaltern classes due to the economic crisis has created dangers for the power bloc, which in turn has increased tension within it.

AKP’s hallmark is to keep the bottom and the top of the society together. However, the economic crisis has destabilized this “magic formula”.

The government is not only obliged to provide a profitable business climate for capital but must also gain the consent of the lower classes for its economic policies and justify the austerity programme through various ideological instruments. Thus, Erdoğan’s statement on 23 May 2019 at the 12th Labour Council Meeting organized by Turkey’s Ministry of Family, Work and Social Services was significant:

“Dividing the society into classes according to people’s occupations, inferring conclusions from their conflicts and then jumping to ideological theories has no place in our world, civilization or culture. If the bosses and workers meet at the same table when they break their fast, if they stand for the same prayers in the mosque, if they lie in the same cemetery, ethically there is no class distinction there. Having little or a lot of money is another matter. There is talent within it, there is effort, there is grace and, above all, there is destiny.”

Erdoğan’s denial of class struggle, especially during crises when class contradictions become more visible, or at least attempting to explain away these class differences using various ideological means (fate, prayer, etc.) indicates that the government is under very serious pressure. As political analyst Kemal Can put it in his article, titled “The Disloyal Rich and the Ungrateful Poor” in Gazete Duvar, the AKP’s hallmark is to keep the bottom and the top of the society together. However, the economic crisis has destabilized this “magic formula”.

The struggles within the power bloc have continued since the 31 March 2019 elections while problems in Turkey’s international relations have intensified. This could cause further economic deterioration before the Istanbul elections are rerun on 23 June 2019. Accompanied by these developments, AKP is once again trying to postpone problems and use all its power to retain Istanbul municipality. However, the main stress test for the power bloc will start after the June elections, when all the postponed issues are re-aggravated.