In the second part of the series “Alternative Organizations in the Labour Struggle”, we lend an ear to a veteran independent union, DGD-Sen… They set out in 2012, with a type of organization different in structure and functioning to other, existing confederations, and since then have carried out the unionist struggle through Workplace Committees and Workers’ Assemblies. Chairperson Murat Bostancı and organization specialist Neslihan Acar tell the story of DGD-Sen.

When and how was the Depot, Warehouse, Shipbuilding and Marine Transport Workers Union (DGD-Sen) founded?

Murat Bostancı: We were officially founded on 24 December 2012. It was Migros depot workers that led to our establishment, it was from there that the union emerged. There were three unions in what is known as line of work no.16 in the Regulations Concerning Lines of Work/Business –covering shipbuilding, seafreight, harbours, dockyards, depots and warehouses– two of them were under Türk-İş and the other one was under DİSK. Because we did not fit in with any of these unions, we came together as seven workers from three different depots. On 24 December 2012, we filed our official application and founded our union. We held our first congress six months later.

You have workplace committees and workers’ assemblies, workers directly take part in decision-making processes. Can you explain the process?

Bostancı: I am the chairperson of the union, but that’s only on paper. It is not that important that our five administrator friends appear so on paper. Workplace Committees are an absolute must for us at all workplaces where we are organized. The entire process takes place at Workers’ Assemblies via these committees. Union activities are performed with decisions taken by our worker friends there. Whatever we do regarding a specific workplace, it is something that our worker friends there will decide themselves. And that is how the union also operates. In other words, the union is these Workplace Committees and Workers’ Assemblies itself. Once you organize as assembly-committee-council, you have actually gone beyond the union. That’s what matters after all. If you are organized, you can stand side-by-side and make demands. Of course, both the system and the yellow, or bureaucratic unions practice various maneuvres to obstruct the path of independent unions. During this challenging period, we continue on our path to raise the class struggle with all our means.

You stated that you “did not fit in with any of the existing unions”. In what way did you not fit in, why did you choose to become an independent union?

Bostancı: A threshold of 1% [of the number of workers in a specific line of work/business] for unions linked to a confederation, and of 3% for independent unions was imposed to be able to establish a union. The Constitutional Court cancelled this regulation, ruling that it was in breach of the principle of equality. It declared that the 1% threshold would be valid for all unions, whether confederation-linked or independent. However, there is a caste system at other unions. The chairperson has a salary of 50-60 thousand liras, and even the union’s organization specialist receives a salary close to that of a member of parliament. Under such circumstances, they are unable to defend the rights of the worker, all they can do is greet the working class from the podium. Other than that, they aren’t engaged with reality much. There is no democratization in the internal operation of unions either. The first thing we made a point of from the very start was not to reduce the union struggle to securing a Collective Labour Agreement (CLA/TİS); workers’ health, workplace safety, job security, negative conditions of work, payments, they should all be added to the struggle; after all, the logic that reduces the union movement to CLA/TİS is itself a false logic. 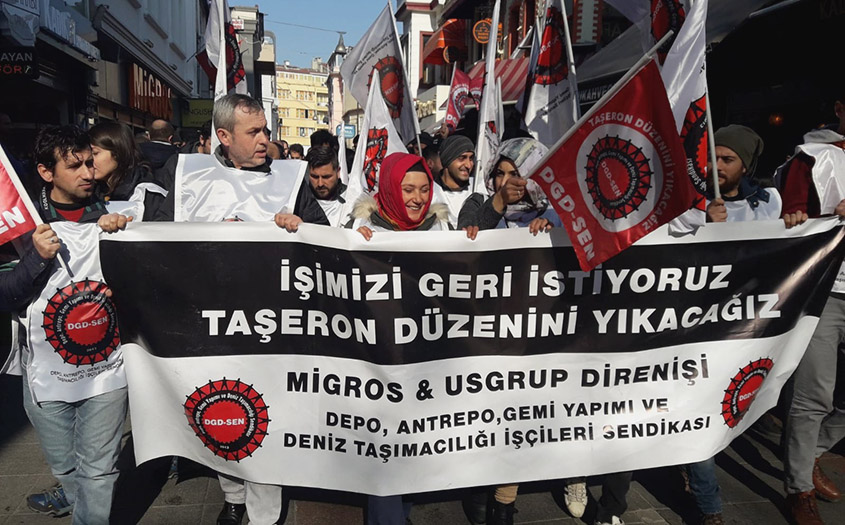 Neslihan Acar: There were company unions during our foundation period. Our friends even if asked Liman-İş, one of those unions, to “come and organize here”, but they responded by saying, “we don’t organize at subcontractor workplaces”. So we either had to found a new union, or apply a different, transformative, pressurizing method on the existing union. All unions, including DİSK, said “we don’t organize at subcontractor workplaces”. Yet there is the blatant fact of the prevalence of subcontractors in this country. Your line of work is a depot, ten workers are registered under the company, yet ninety are subcontracted. Does it make sense to say, “I’ll organize the first ten, I’m not concerned about the other ninety”? I work as a pollster, and I know that around ten thousand pollsters work in our industry, and not a single one of the ten thousand has social security. So, when we have social security, we can organize at Sosyal-İş, but if we don’t have social security, then Sosyal-İş acts as if we don’t exist. When we went to the union, they told us, “go get social security and then come to us”. But if I can carry out the struggle to achieve that by myself, why should I need you?

In which cities are you organized? How do your workers’ committees get involved in these organizations?

The first thing we made a point of from the very start was not to reduce the union struggle to securing a Collective Labour Agreement (CLA/TİS); workers’ health, workplace safety, job security, negative conditions of work, payments, they should all be added to the struggle.

You said, “both the system and the yellow, or bureaucratic unions practice various maneuvres to obstruct the path of independent unions”. What are these maneuvres?

Bostancı: In many workplaces we come across this: “You are below the 1% workplace threshold, you can’t sign CLAs/TİSs. Whenever we reached a considerable number, organization specialists have maneuvred and said, “This union membership is below the 1% workplace threshold anyway, it has no power to sign a CLA/TİS. We will pay your salary on time when you are fired, or when there is an action” and made workers member to our union resign. Yet there are hundreds of thousands of workers that could be organized in our line of work. There are many docks and depots where organization could take place, but yellow unions, company unions come and intervene where we are working on organization. Their aim is to block the path of independent unions. The 1% workplace threshold is part of that, to be frank. Within the scope of International Labour Organization (ILO) regulations this threshold should be invalid. We have to register 1600-1700 members across Turkey to pass the 1% threshold, is that realistic? Imagine there are 100 workers at a workplace, and we manage to register all 100 as members, still we cannot sign a CLA/TİS. If forced, perhaps only a protocol can be signed. This is a maneuvre to protect large unions, bureaucratic unions, to continue to feed them and to block independent unions.

All unions said “we don’t organize at subcontractor workplaces”. Yet there is the blatant fact of the prevalence of subcontractors. Your line of work is a depot, ten workers are registered under the company, yet ninety are subcontracted. Does it make sense to say, “I’ll organize the first ten, I’m not concerned about the other ninety”?

Acar: Can workplace murders be prevented? Yes, every single one of them can be prevented. Look, this is what the boss does: The machine has a fault that could, at any moment, entrap a worker’s arm, but the boss lets the machine keep producing. The worker works with a thirty-year-old machine. As long as it works, as long as it produces the same product, there is no problem for the boss. That, too, is part of the working organization. Good union organization can, of course, prevent workplace murders. At least it can remind the employer about the difference, “That is a machine, but this is a worker”. Today, workplace murders take place in many unionized workplaces, because company unions or yellow unions are bothered not about this aspect of work, but with collecting union fees, and they do nothing about it.

Where does DGD-Sen see itself in the struggle of the working class?

Acar: It is, in fact, the own structural boundaries of a union that determine the class struggle. The precondition of improving life is to stand side-by-side with the workers. If, as a union director, you receive a salary of twenty thousand liras, you can’t connect with a worker who gets two thousand. Nor can you justify that worker’s demand for 2500 liras.