In the fourth part of our series “Alternative Organizations in the Labour Struggle”, it is now the turn of Nakliyat-İş [The Transportation Workers Union], which is on the side of workers whether they are in the same line of work or not, whether they are members or not, and the union is directly opposed to yellow unions, and is present at almost every site of resistance. Nakliyat-İş carries out exemplary union activity, joining the struggle with workers who have been dismissed, whose rights have been usurped, whose unionization has been obstructed and who have been left without security of life, lending their resistances material and moral support and providing guidance. Erdal Kopan, the organization department head of this unique union tells their story. 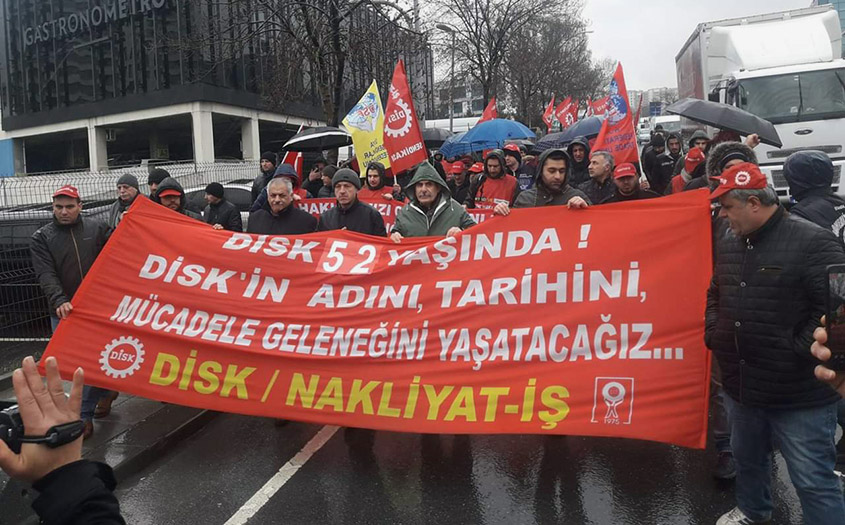 Erdal Kopan: We are trying to organize workers in the transportation line of work, who are currently working without a union, without a collective agreement, in other words, without organization. Workers in our line of work become members of our union by exercising their constitutional rights, to earn wages that will enable them to live humanely, and for more humane working conditions. However, unfortunately, in our country, in the hands of local and foreign fat cats and the governments that work hand-in-hand with them, workers are being condemned to unionless, slave-like conditions of work. Precarious employment in a subcontractor hell has been turned into the rule of the game by these fat cats. They want to trap our working class in this prison. The right to organize, the right to unionize, which is a constitutional right, is being actively obstructed. Reinstatement and authorization lawsuits last years, thus creating a serious obstacle in the path of struggles for organization and rights. Security forces intervene in the most violent manner against workers who are exercising their constitutional right to unionize. However, when the bosses prevent workers from exercising their constitutional rights, and despite the occurrence of pressure, threats, detentions, court cases and actual attacks, bosses face no legal sanctions whatsoever. In the same manner that, in accordance with their class interests, fat cats carry out unlawful attacks without hesitation on our working class’ slightest demand for rights, we too, as the working class, must go all out and use our power that comes from production. Only then can we really respond with organized force to these attacks, and we will have the final say against all attacks as workers in resistance. 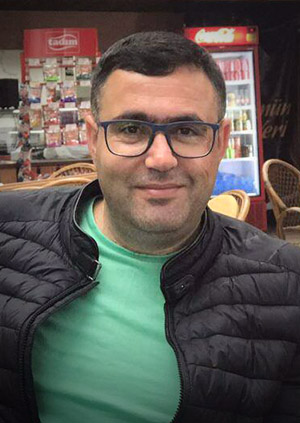 Transportation is a line of work where many workplaces are scenes of fatal accidents –we have every reason to call them murders. How does your union put up a struggle against workplace murders?

Unfortunately, Turkey is third in the world, and first in Europe in fatal occupational accidents. The fat cats, in order to prevent union organization and have workers work without security or organization, for low pay and in slavery conditions, employ workers from special employment bureaus, and sometimes have work subcontracted. Although it is a constitutional right, workers who are union members are discharged for this reason.

Employers who show complete disregard to the safety of workers, who take no precautions or measures whatsoever are issuing invitations to all manners of accidents and workplace deaths. Subcontracting is all-out-encouraged by the state, and inspections are insufficient, these are the other reasons that lead to workplace murders. Unfortunately, workplace murders continue in our country, and the numbers are increasing. Workplace murders are also increasing at cargo operations. Workers who work 15-16 hours a day in slavery-like conditions and are paid the minimum wage are losing their lives in workplace murders. We have driver friends who die in road accidents caused by extreme exhaustion and sleeplessness.

Yet according to Article 153 of the ILO agreement to which Turkey is party, a driver must have 10 hours of uninterrupted rest within a period of 24 hours. The maximum duration of driving, including overtime, cannot be in excess of 9 hours a day, and 48 hours a week. Working conditions at cargo, logistics and transportation companies where tens of thousands of our worker friends are employed do not even comply with the minimum working conditions determined within the framework of the Constitution and other laws. Workers are forced to work in hazardous environments for human health at logistics warehouses, with no health and safety measures. Precisely for such reasons, the conditions at these companies are those of forced labour and slavery, conditions that are prohibited by the Constitution. Moreover, the monthly payments they receive are far from enough to lead a humane life, they are misery wages.

The organized struggle of workers will say “Stop!” to workplace murders. Companies impose working conditions that refuse to abide by rules and this is because there is insufficient inspection. Workplace murders will only stop, humane wages will only be paid, working conditions worthy of human dignity will only be secured if we can build an organized struggle. We invite all our worker sisters and brothers to the organization we carry out at almost all cargo and transportation companies.

Severance Pay and Collective Labour Agreement; what is your view of these two important issues?

Türk-İş [Confederation of Turkish Trade Unions], with this Collective Labour Agreement it has signed, has sold the workers out in line with its history and mission. This agreement has been done at a rate below the inflation. Unions that are affiliated with Türk-İş, who are party to this agreement have also become party to the betrayal.

There will no longer be any job security for the worker either. With the transfer to the fund, the impact of severance pay on job security will also be removed, and employers will be able to discharge workers with no concern over costs. If the employer fails to deposit premiums, workers will face the risk of receiving no severance pay at all. Progress billing conditions for severance pay will be worsened. Those whose ten-year period of premium payment is not complete will not receive severance pay if they leave their position due to marriage, military service or health reasons.

If we then come to the Collective Labour Agreement that concerns the public workers at Türk-İş [Confederation of Turkish Trade Unions], we must say that Türk-İş, with this Collective Labour Agreement it has signed, has sold the workers out in line with its history and mission. This agreement has been done at a rate below the inflation. Unions that are affiliated with Türk-İş, who are party to this agreement, by not putting up a struggle, have also become party to the betrayal. They have not carried out a single action to this day. Those who have betrayed the working class in this manner, those who have not said a single word, how will they dare and speak about the struggle of the working class? They will be held accountable by the working class, sooner or later.

Nakliyat-İş was founded in 1975. Since then, what kind of changes have class struggle and workers’ organizations undergone?

Against the American unionism of Türk-İş, which was founded in 1952, and as a grassroots reaction to it, DISK (Confederation of Progressive Trade Unions of Turkey) was founded in 1967 on the basis of the will of revolutionary workers. DISK was founded with an anti-imperialist worldview that argued for revolutionary class unionism. In a short period of time, DISK became the alternative for our working class against yellow unionism, it became a centre of attraction and it organized hundreds of thousands of workers. DISK’s history is a history of struggles, it is a history of occupations, strikes and resistances, against imperialism and local-foreign fat cats.

As Nakliyat-İş we have been saying for years now that there is a “catastrophe of unions” in Turkey. We implement the principle in our union charter: “Union directors, including the chairperson, cannot be paid a salary higher than the average workers’ salary.”

DISK was closed by the fascist regime of the September 12 military coup d’état. Then, our working class was forced under the confederations of yellow unionism, Türk-İş and Hak-İş first and foremost among them. The working class was condemned to yellow unions. And today, when DISK should present an even stronger alternative to yellow, conspiring, colluding unions, when it should be a centre of attraction for our working class and when it should put up a direct struggle against yellow unionism more than ever, it has failed to do so. We claim the name, history and tradition of struggle of DISK, but the present administration has failed to display an approach in line with its own history and tradition of struggle.

You are affiliated with a confederation, with DISK, but you carry out your struggle like an independent union. How do you describe your approach to the struggle?

At Nakliyat-İş Union, since we took over the management in 1994, we have defended a certain approach. This approach is revolutionary class unionism. It is this approach that has won occupations, strikes and resistances to the history of the working class. We will continue our struggle on the side of all workers, whether they are our members or not, fighting against the exploitation and persecution of fat cats.

As Nakliyat-İş we have been saying for years now that there is a “catastrophe of unions” in Turkey. We implement the principle in our union charter: “Union directors, including the chairperson, cannot be paid a salary higher than the average workers’ salary.” Our material life determines our thoughts. Union directors must live like workers.