In the series titled “Alternative Organizations in the Labour Struggle”, we first meet with two independent unions founded in the first half of 2019. Why have PTT (the Post and Telegraph Directorate) workers chosen to be an independent union, and for which necessities did they organize? PTT-Sen [Union of Postal, Telephone and Telecommunication Workers] organization specialist Ayşe Büşra Yılmaz, PTT Kargo-Sen’s [Union of Postal, Transfer, Freight and Cargo Workers] chairperson Naim Çakırgöz and union representative Ömer Çelik tell their story.

The first step towards the privatization of PTT was taken in 1994, and in 2013 PTT became an incorporated company. Let’s begin with the privatization process, which currently continues. How does this transformation affect PTT workers?

Naim Çakırgöz: We are talking about a process that began in 1994. I have been in this line of work for a decade now. There is a mountain of a difference between the day I began work and today. You know the government has recently been saying, “we are placing everyone on permanent staff”: But this did not include PTT, and it didn’t include many other institutions. That is why we get one-month, three-month and at most, six-month contracts. This creates genuine pressure on employees. There is mobbing in the workplace. At the moment, we are being managed by companies we are tied to. In other words, you work at a public corporation, but it isn’t run by a director or chief of that corporation, but a company executive. In fact, when there is a problem, the corporation says, “The company is responsible of you”. And when you then go to the company, they say, “You have to go to the public corporation”. They leave the worker in the middle. We are in the midst of absolute uncertainty.

Subcontracting is after all, a system of slavery. And besides, it is taking place openly, at a state institution, at a public institution. What we should radically discuss is the elimination of subcontracting.

Ayşe Büşra Yılmaz: Each and every one of the subcontractor companies has a free hand. There are so many differences in terms of working conditions; one begins at 8 am, the other calls you at 6 am. Every company has a different practice. A worker friend said, “Each has founded their own republic, each rules by its own laws”. That’s exactly how it is, each company has its own laws and its own republic.

Çakırgöz: Precisely. Private companies have been allowed to take over PTT. To such an extent that PTT has been excluded from the scope of public tenders. In other words, company A or B can come and acquire a certain piece of work without a tender being held. What does PTT do? It merely prepares a document of specifications.

Ömer Çelik: For instance, the company we are affiliated with was founded only a day before the tender, but they won the tender. The tender process is carried out completely behind closed doors.

Çakırgöz: There are around 40 thousand workers on the permanent staff of PTT. That includes clerks, workers, chiefs, directors and the general director right at the top. The number of subcontracted employees is now close to 15 thousand. This is a huge figure. Those who are on the permanent staff are our officer friends you see at the counters, those who greet and communicate with the public. But there are also workers you do not see, the background, that is where the real workload is and, that is done by around 15 thousand people. 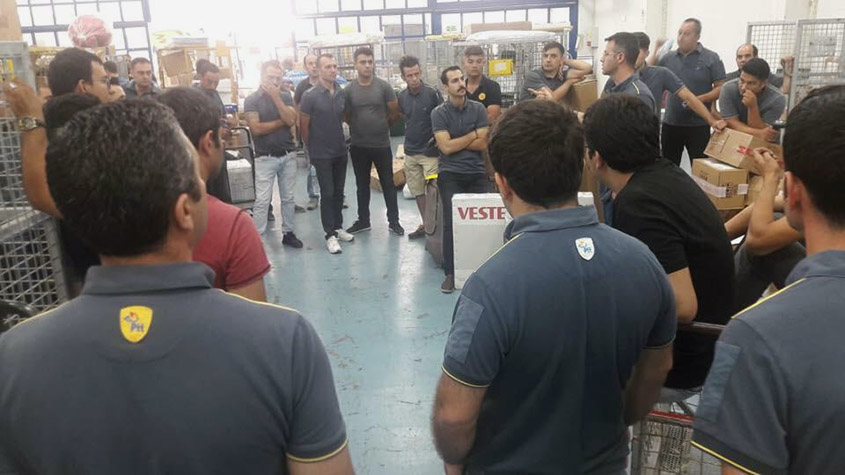 Yılmaz: What we call subcontracting is after all, a system of slavery. And besides, it is taking place openly, at a state institution, at a public institution. I won’t compare it with other examples, but the state is doing this of its own accord. What we should radically discuss is the elimination of subcontracting. They say, “Good news for subcontracted workers, you will become permanent staff”, but PTT is not within the scope. Why is PTT not included? What is the exact reason, how is the tender process carried out, it is so difficult to access clear information on these issues.

Çakırgöz: As we say, PTT is turning into a private company, it could even turn into a holding company, and it surely looks like it will.

We said, “It won’t work with these unions, let’s found our own union”, that’s how we started. We were angry, we couldn’t get what was our right, and even worse, we were taken for fools.

When and how were PTT-Sen and PTT Kargo-Sen founded? Can you tell us more about the course of events that took you to founding your unions?

Çakırgöz: PTT Kargo-Sen was founded on 4 March 2019, and PTT-Sen on 3 April 2019. But there is a preparation period before our official foundation. We began holding meetings together; asking, what can we do, how can we act together with other unions. There were the Öz-İletişim [the Communication Workers Union] and Öz-Taşıma [the Transport Workers Union] unions both affiliated with Hak-İş [a confederation of unions]. They had the necessary majority as well, but we saw that they weren’t acting on it. Then another union came, Haber-İş [another Communication Workers Union], which is affiliated with Türk-İş [a confederation of unions]. They were badmouthing Öz-Taşıma. But we already knew that Öz-Taşıma was bad. They acquired the necessary majority across Turkey and they had around 7 thousand 200 members at PTT. So, this Haber-İş Union, since it is in the communication line of work, if it had wanted, it could have very easily signed a Collective Labour Agreement (CLA/TİS) at companies in that line of work and in provinces where the companies were, but it didn’t.

Çakırgöz: We said, “It won’t work with these unions, let’s found our own union”, then we met our friends, that’s how we started. We were angry, we couldn’t get what was our right, and even worse, we were taken for fools. Why would anyone want to found an independent union? Why would I attempt such a thing when I already have so much to do? It’s because the existing unions didn’t function. 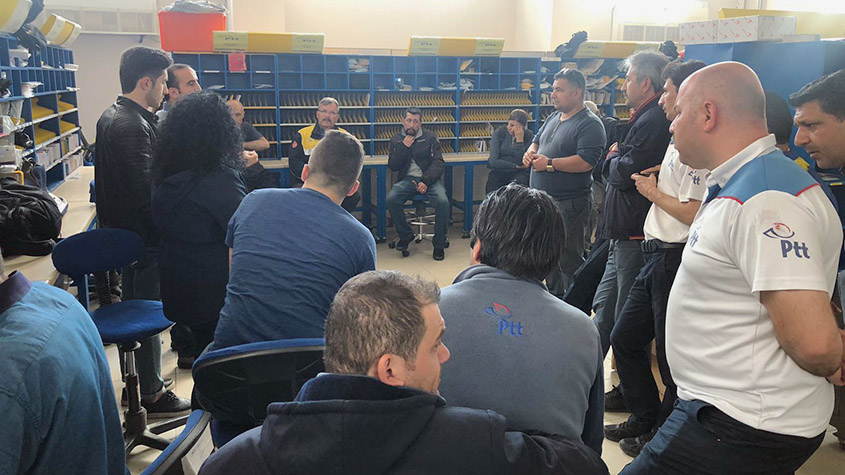 Why did you choose to become an independent union?

Yılmaz: Some workers are prejudiced against DİSK [The Confederation of Progressive Trade Unions of Turkey], and workers have long had enough of Hak-İş, and they have understood what Türk-İş is all about. And ultimately, what matters most, the demand came from the grassroots. Rather than “That one is bad, this one is good”, workers wanted to find their own path, and so we set up on this course.

Çelik: PTT workers had already suffered disappointments because of the unions’ false promises. We founded an independent union so as not to repeat the same mistake and end up at the same point. The board of the union is made up of subcontracted workers anyway. We thought that it would be easier for workers to identify with the union, and that we would progress more comfortably.

Çakırgöz: Our friends also hesitated because of this: “Other confederations have failed to do this; how can you succeed in founding a union?” Our friends were acting according to hearsay, and they also acted with prejudice against us. That is precisely the problem: “They failed, so you can’t succeed either. They’ll fire you, or you’ll face mobbing” And it is true, they threaten us, practice mobbing against us, but despite all odds, here we are. There’s no point in being afraid of anything. What we are doing is not unlawful.

Yılmaz: Of course, there are certain difficulties, for instance, Hak-İş was saying: “We have bureaucratic power, you don’t have that, but you have registered a good number of members”. We are talking about 1500 members in 25 days. So at some point, the workers realized that they could build their own organization, they can handle it, why should they suffer yellow unions? Those workers are no longer the workers they treated as a fool. Those workers have learned how to run a union, the workers have taken up their own fate and they are no longer indebted to yellow unions. That tall tale is over. Once they build a little self-confidence, it is going to improve even more.

Yılmaz: A company, another PTT subcontractor, transferred the workers to the construction line of work. They are constantly changing the [registered] line of work, sending workers here and there. We are not responsible of this, it is the bosses, the employers who do all they can to stop us from organizing. Workers ask us about the distinction between lines of work, and we explain to them that this is not something that we do. It is something done to prevent us from organizing, so that our power to hold agreements falls through, so that our membership numbers drop. That’s what we are working on now. We will file an objection at the Ministry.

But membership registrations to the union continue despite this problem regarding the line of work, don’t they?

Yılmaz: Yes. I would like to remind you that when we were founded as an independent union, we registered around a thousand members in the first month. I say this to point out the demand from the worker for a union. It shows that people were waiting for this.

What are the advantages and disadvantages of being an independent organization?

Yılmaz: One of the challenges of being an independent workers’ organization is the fact that the administrators at the union are workers, too. They work and they organize the union at the same time. In addition to that, there is especially the constant black propaganda carried out by Hak-İş, and the fact that the doors that are always opened wide to them are closed in our face. Then there is also the matter of financial strength, because we are workers. These are the difficulties faced by independent workers’ organization, but on the other hand, being an independent union means that it is possible to create workers’ politics. The union is the vehicle for that, and ultimately, the workers begin to make their own politics. The workers begin to see the workers around them. In other words, the story grows, it does not stay put in a single place.